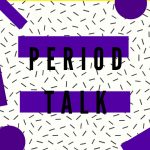 It is without doubt that the secrecy and stigma surrounding women’s menstruation unfortunately still persists in our society today. Starting at school age, the taboo about periods prevents it from being an openly talked about subject; rather in many communities it is still thought of as an uncomfortable topic of conversation, even ‘dirty’. It is a serious issue that needs to be addressed, particularly in the case of those women and girls who are more vulnerable and who struggle to afford sanitary products because the underlying, persistent period stigma can stall many women from openly asking for or seeking support.

Kate Bowen-Viner, Senior Associate at the Centre for Education and Youth, who has undertaken a lot of research into period stigma, particularly in schools, spoke to me about what she discovered. Almost all the girls she spoke to said that period stigma, combined with menstrual pain, made girls want to take time off school and that they felt uncomfortable talking to teachers, especially male teachers, about period-related issues. I myself remember experiences like this at school, such as occasions when my friends and I would feel too uncomfortable to talk to our male P.E. teachers about suffering from period cramps so we would often just grin and bear them during the P.E. lesson; an issue that deserves more empathy and acknowledgment in our schools. An important issue that Kate found after speaking to the schoolgirls, was that they all wanted better access to more private toilets during lessons and break times because they worried that boys would often be standing outside the toilet whilst they were changing, making them feel anxious and self conscious. 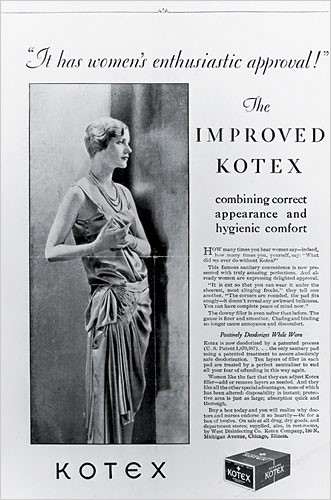 However, general awareness and an opening up of the discourse about menstruation, I’m pleased to say, have increased. An important milestone was reached with the UK Government’s removal of the Tampon Tax earlier this year; however more can still be done to tackle the stigma. As Kate argued, Relationship and Sex Education classes in school should be invested in, with policy makers training and providing the resources for the teachers, to help eradicate the stigma. Otherwise, as Kate stated, ‘infrequent education means that girls often rely on representations in the media, which are problematic because they often perpetuate the period stigma’. For example why do period product adverts so commonly show clinical blue blood, instead of red? This perpetuates the idea that periods are ‘dirty’ and something to be kept secret. How much has changed over the decades?

Looking back to 1928, model, Lee Miller, became the first real person in an ad for menstrual hygiene, specifically for ‘Kotex Menstrual Pads’. This resulted in a lot of fallout; the American public were shocked and upset, they simply could not fathom why such a respectable woman would associate herself with such an unspoken about and dirty subject. Apparently, Lee Miller said that she was pleased to have broken the taboo, however I am not too sure how much progression in the media there has truly been since the 1920s because, as we know, today’s world and especially the beauty industry, remain highly influenced by the media, and unfortunately a period stigma undoubtedly still exists.

It’s clear more still needs to be done, in schools, the workplace and the media, to tackle this stigma if there is to be an open discourse about periods and any hope of more accessible and well-known support for wider period-related issues. As Kate has emphasised from her research, perhaps the most effective place to start in the challenge of eradicating period stigma, would be in schools as this is where negative ideas about menstruation can have the most long lasting affect. 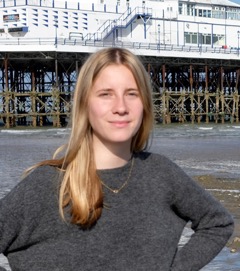 Esther, 21, is from Eastbourne and currently studying a Liberal Arts degree at the University of Leeds. Esther is passionate about tackling period poverty, period stigma and its impact on gender equality. Esther enjoys writing articles and creating designs which can communicate these issues in a clear and informative, hoping to, ultimately, instil positive change!

A Letter to my Younger Self